Turkey sets up new military post in Jabal Al-Zawiya - It's Over 9000! 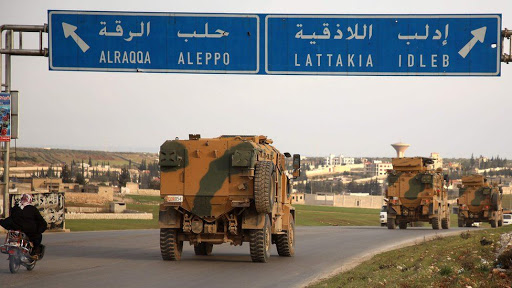 Turkish troops have started to set up a new military post in Jabal al-Zawiya as part of the Turkish reinforcements which arrived yesterday was dispatched to Deir Sonbol in Jabal al-Zawiya, the Syrian Observatory for Human Rights (SOHR) reports.

SOHR said earlier that the Turkish forces brought a new military column of nearly 100 trucks and military vehicles into the Syrian territory in the early hours of Friday morning. The column entered Syria via Kafr Lusin crossing on the border with Iskenderun, north of Idlib city.

Yesterday, SOHR  reported that Turkish troops were stationed in a hill, east of Maarrat Masrin city in the north-east of Idlib city, in which armored vehicles and personnel carriers. Hours earlier, Turkish troops were deployed in Al-Jinah town in the western countryside of Aleppo.

During the period between February 2 and today, SOHR activists monitored the entry of more than 1900 trucks and military vehicles to the Syrian territory, including tanks, personnel carriers, armored vehicles, mobile bulletproof guard booths and military radars.

Meanwhile the number of Turkish soldiers who were deployed during the same period in Idlib and Aleppo reached nearly 6500.