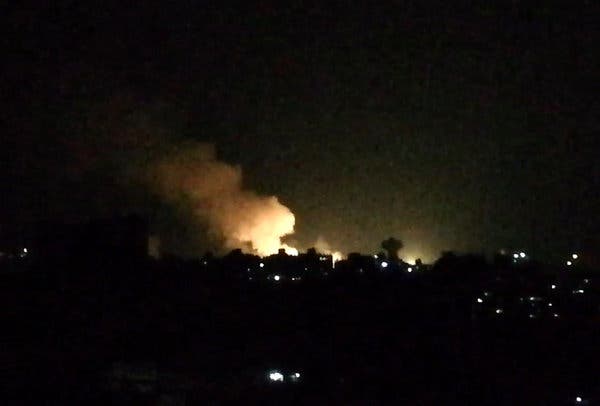 Syrian state media said only that its air defences intercepted missiles over the capital overnight while Israel did not immediately comment on the strikes.

Israel routinely fires missiles at what it says are Iranian targets in Syria, where elite Iranian forces and allied militia play a key role.

According to the Syrian Observatory for Human Rights, the strikes launched late Thursday hit military targets in the area of the international airport.

Rami Abdel Rahman, the director of the Britain-based Observatory, said the dead were three Syrian soldiers and four members of Iran's Revolutionary Guard.

The Observatory said the targets in the airport area, which has been repeatedly hit in similar strikes, included an arms depot.

The strikes on the airport compound came just after the arrival of a cargo plane, according to Abdel Rahman, who could not specify where the aircraft had flown in from.

He said a vehicle had also been hit on the road towards central Damascus in what seems to have been an attempt to stop a weapons delivery.

SANA released a video of what appeared to be Syrian air defences firing over the capital.

Israel's political leadership has spoken publicly of the bombing campaign, although the army rarely comments on individual strikes.

Israel argues that Iran's presence across several parts of Syria, including near the Golan Heights it occupies, is a threat and that it will continue its strikes.

Among them were three Iranians as well as 12 Syrian and foreign members of Tehran-backed militias.

Iran has deployed its Islamic Revolution Guard Corps (IRGC) in Syria to support Bashar al-Assad, who clung on by a thread earlier in the nine-year-old conflict.